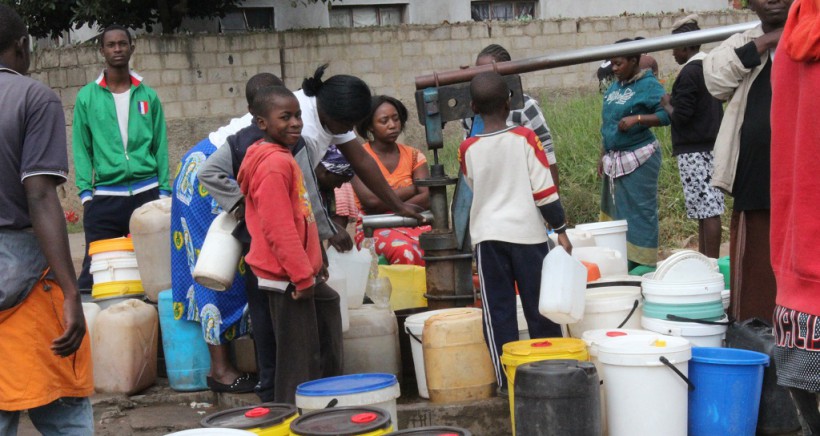 In the last few years the water crisis has worsened in the two major cities of Harare and Bulawayo. In Harare some residential areas have gone for long periods without running tape water. Mabvuku-Tafara is one such area and to date the crisis has extended to other areas like Msasa Park, Chadcombe, Epworth and Hatfield to mention but a few. Bulawayo has also seen areas like Njube, Mpopoma and Tshabalala being hardest hit by the stipulated 72 hour water shedding. These are some of the most highly populated areas in Bulawayo and they also house a lot of people. Some of these suburbs have a lot of old citizens who are unable to fetch water for themselves therefore worsening their plight.

Reports indicate that in 2012, nearly 300 cases of typhoid were reported in Harare alone after a prolonged spell of unusually hot weather amid acute water shortages in the city. The typhoid outbreak followed hot on the heels of a cholera outbreak with residents blaming the spread of the disease on the lack of adequate clean water in the city.

Against this background, there is no sign of relief for residents with council announcing further cuts to be experienced in the future. In proposing solutions, privatisation of the service has come out clearly from the officials managing water. ZINWA announced plans to commercialize water, while the City of Harare projects to generate US$112 million from the sell of water. This approach to the water crisis is a cause for concern.

There is need for the construction of viable social, political and economic policies in order to move the country forward. This takes both civic and government initiatives where civil society must defend livelihood from an accountable government. The capacity to deliver on these civil society roles is thus required and this must be beneficially interfaced between the civic and the government processes.

Before the year 2000, there had been a gradual withdrawal of key government funding in water management as in many other social services under the influence of the IM dictated policies.. This situation was further worsened by the economic crises of the post 2000 era. ZIMCODD has since 2007 campaigned against the privatisation of water. In its initial intervention in 2007, it mobilized over 4 000 signatures of people protesting against Zimbabwe National Water Authority’s (ZINWA) taking over of local councils’ role of water management. The task of managing water and sewer reticulation was later returned to local authorities in Harare. In Bulawayo the ZIMCODD led campaign was even more emphatic as ZINWA failed in its bid to take over water management.

In this new crisis regime, ZIMCODD has started to carry out activities aimed at making a contribution towards filling the gaps inherent in current responses to socio-economic challenges and build capacity for a sustainable socio-economic justice movement around water. The specific objectives are to:
- Publicize the true state of water service delivery for Harare and Bulawayo
- Facilitate a platform for community mobilisation
- Amplify the call for the right to adiquate safe and clean water
- Facilitate a platform for water supply policy engagement

Research has been commissioned on the water situation in Harare and Bulawayo and the following calls have been made loudly:
- Capacity expansion and leakage control
- Improvement in the accuracy of water bills
- Consumer involvement and adopting a quick response system to customer complaints
- Ensuring transparency and accountability in water management
- Crafting of workable policies in water supply and stop the privatisation approach to water supply.
- Consultations in budget fommulation and public finance managent to include the borrowings that the council does.
- The immediate implementation of the Zambezi Water project in solidarity with Bulawayo

ZIMCODD declares that the management and control of water must be public, cooperative, participatory, equitable and not for profit. It calls for unconditional use of natural resources available to support efforts to bring water to the dry tapes.